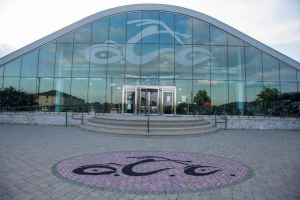 Since October, David Prater has been working at ABR Print as a designer. His favorite part of the job is making the product, and using that product to make the customer happy. David became interested in art at young age. He had an aunt that attended college for art, and a grandmother who made handmade items. His first creative memory is being in first grade, drawing southwestern scenes with pueblo houses. His goal when creating any art is to capture emotions visually. David takes inspiration from impressionist artists in his own work. He strives to communicate subtly in his art, as they did. His favorite mediums are Photoshop, paints, pencil, charcoal, and reverse charcoal where you erase to make an image in negative space.

Aside from the arts being his livelihood, David feels the arts are important because they allow for communication amongst people. His advice for young artists is to realize that there is more to art than just technical skills. Many young artists feel like their art isn’t up to par if it isn’t realistic. However, other artistic factors such as composition and color usage that can carry a message even if the art is abstract. His advice for college age artists is to maintain some of the youth and vitality that they had as a child. Even though you will be judged on technical skills in college, don’t let art become a chore to you. Keep creating as if you didn’t have to. Keep in mind that working in the arts is an entirely different experience than going to college for the arts.

David’s own experience in graphic design came when he went to IUPUI for vector graphics. He had previously considered working at Disney or Nickelodeon. However, the novelty of creating art via digital means won out. When graphic design exploded as an industry in the nineties, David was there. While graphic design has existed as long as art has, the technology aspect is new. This has led to some misconceptions about computer aided graphic design. For one, there is a myth that graphic designers are artists who are lacking in basic drawing skills. This isn’t true. To be a successful graphic artist one must have the foundations any other artist requires. Another misconception common to working artists is the stereotype of the starving artist. However, many graphic designers are able to support themselves with steady work. Not only are graphic designers benefitting themselves with their chosen profession, they are essential to branding and advertising in business.

While working in graphic design as a career has many benefits, David also listed some things he learned on his own. Graphic design is more than just creating logos, and there can be a lot of stress involved due to strict deadlines. Therefore, it is crucial to have superb time management skills. When David started classes for graphic design, he knew that he could be successful. However, some of his teachers told him that he shouldn’t be in graphic design. When he designed the logo for Orange County Choppers, he was able to prove his worth in the business.

David’s favorite aspect of graphic design work is seeing the reaction of the client and the moment they look at the piece and realize that they can see their message in the work. The worst part is having nothing to show when the deadline approaches, which David never allows to happen.

This concludes our interviews with the graphic design staff at ABR Print. Whether you are interested in graphic design as a career or just interested in Bloomington’s local small businesses, hoping you come away with a better understanding of the art that you see daily. 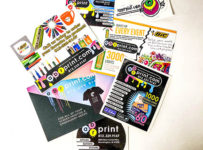